Living in a highly technologically evolved era, it may not come as a surprise when frequent discoveries are made in outer space. Amongst our busy schedules, we barely find the time to acknowledge these feats and breakthroughs in science. However, it is always imperative to stay updated about discoveries such as this in our quickly evolving society, just as it is important to stay updated about pop-culture and newly released episodes of TV-series. Without further ado, here are the top 5 “out of this world” discoveries of the 21st century.

During the year of 2011, NASA announced the discovery of a new “habitable planet” called Kepler-22b. This planet had very similar characteristics to Earth, with a radius only 2.5 times larger. Scientists have yet to find the contents and substances that make up the planet, but have confirmed that it is habitable. How cool is that?

2. Patterns of Water Flowing on Mars

During the same year, in 2011, NASA has confirmed and stated that there might be water flowing on Mars. Which can be seen through time-lapse photos of water flowing along the planet’s rocky surfaces. This gives hope that there may be other planets that share some elemental substances, such as water, and are possibly similar to Earth.

3. Water on the Moon

For a long time, we humans have thought that our Moon was a barren landscape with only large craters on them. However, in the year 2009, water was found in a dark crater on the South Pole of the moon, and soon after, water was discovered in multiple craters around the moon.

4. Pluto and its new Moons

Pluto, as many of us know, was declared not to be part of the solar system for a certain period of time. However, relatively recently, in 2011, it was discovered that Pluto is infact still remains in existence and furthermore, is orbited by 4 Moons of Hydra, Charon, Nix and P4.

5. Discovery of another Planet: Eris

As we have all learned (and should hopefully know by now), there are 9 planets in our solar system, including Pluto. However, in 2005, the possible discovery of a 10th planet, with similar dimensions as Pluto was identified. This planet, along with Kuiper and Asteroid Belt Objects, are classified under a new class of dwarf planet. Eris also has a moon named Dysnomia. 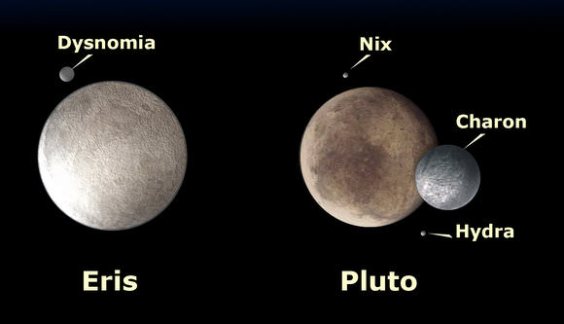