The Return of IASAS Art

Palettes. Paintings. Murals. Graphics. Ceramics. All these common elements of artistry found in the realm of visual arts have been revived with the recent comeback of IASAS Art. Over the past week, the IASAS Art delegates had their hands full with events designed to cater to their artistic interests, including workshops and a visit to the Pinto Art Museum. Those who were not involved also received the opportunity to visit the Art show, where they were able to enjoy the artworks submitted by students from ISM as well as the other five IASAS schools.

Ms. Wong, a HS Art teacher, describes the show as “the cream of the crop.” The show highlights the best work around all of the IASAS schools and “showcases the various mediums that our art students explore,” she adds. These different pieces come from artists across  high school batches, and Bamboo Telegraph was given the wonderful opportunity to take a look behind the scenes, getting to interview several artists that were selected to present their art pieces in the show. 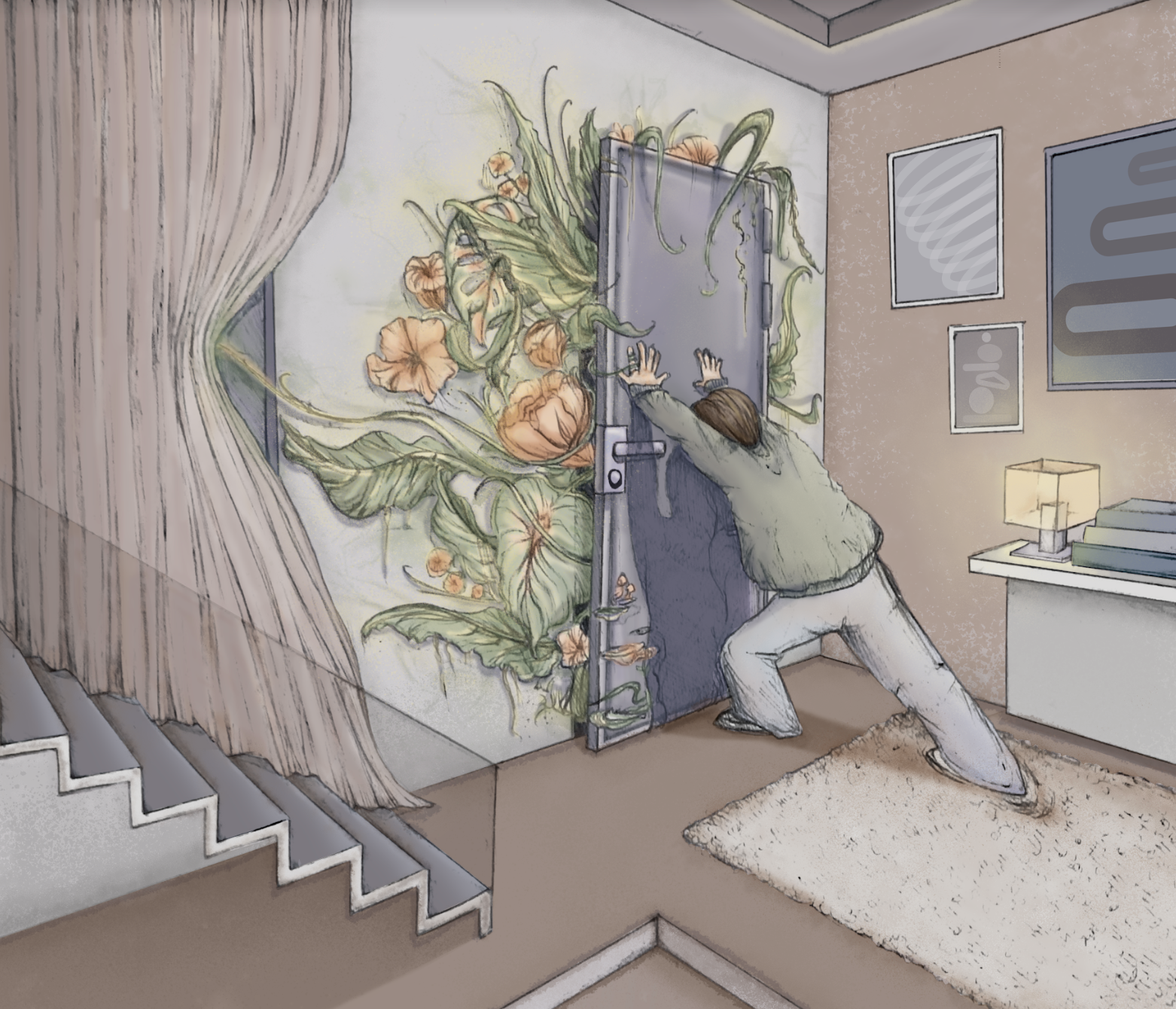 Hinano, a junior, is one of the students that was selected to exhibit their artwork in the showcase. The title of her digital piece is “Nature’s Revenge” created through photoshop. Her work uses juxtaposition to integrate the concept of the modern world as a representation of nature’s vengeance. “The man’s force alludes to corporate businesses and industries that have developed the world at the cost of nature,” she notes. The pandemic served to be a source of inspiration for her, as the artwork depicts how being isolated changes what people view to be normal. “By taking unhealthy means to remain in comfort, we ultimately hurt ourselves” she adds. Now, as she joins IASAS art, she looks forward to enjoying the company of fellow artists and taking in a new experience.

Melvina, a sophomore, showcased her artwork titled, “Landscape”. Her piece was inspired by her childhood during which a majority of her time was spent in the ES playground. It holds great significance to her “as it was the time during a week when I could meet all my grandparents,” she reflects. Looking back on her time in elementary school, she feels nostalgic, missing the simplicity and innocence that a child looking at the world would have. She believes that “IASAS is a great chance for recognition and exploration. The show can gather a lot of people, which is essentially what a painter wants—the desire for people to “read” their artwork—as a chance to not only convey messages, but also interact with viewers.” Her story was one that she wanted to share with viewers in the hopes that they will be reminded of their own youths when looking at her piece. 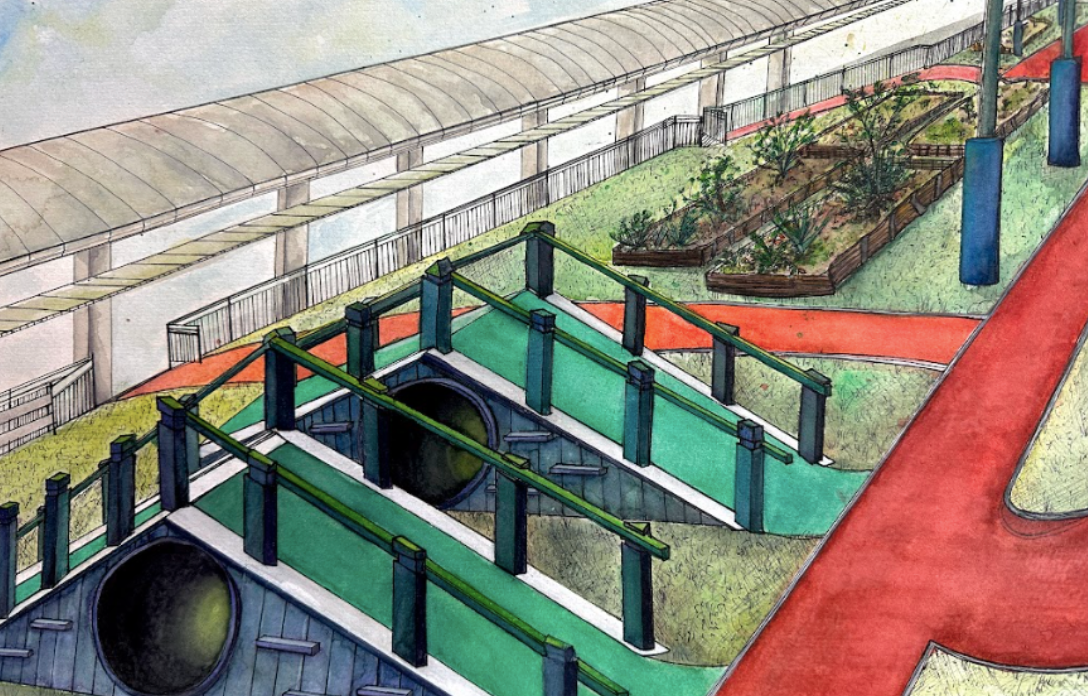 India (10) also exhibited her work in the show. Her piece is titled “Ripples”, which was made to show organic movement. She wished to explore intricate shapes and repetition within her piece, aiming “to have it represent the impact of nature on art.” Initially, she hadn’t intended  to be a part of the show until some teachers complimented her piece. Her excitement grew since she had yet to be  part of an extensive art show until now. She describes it as an “exciting opportunity and privilege to have my work displayed.” 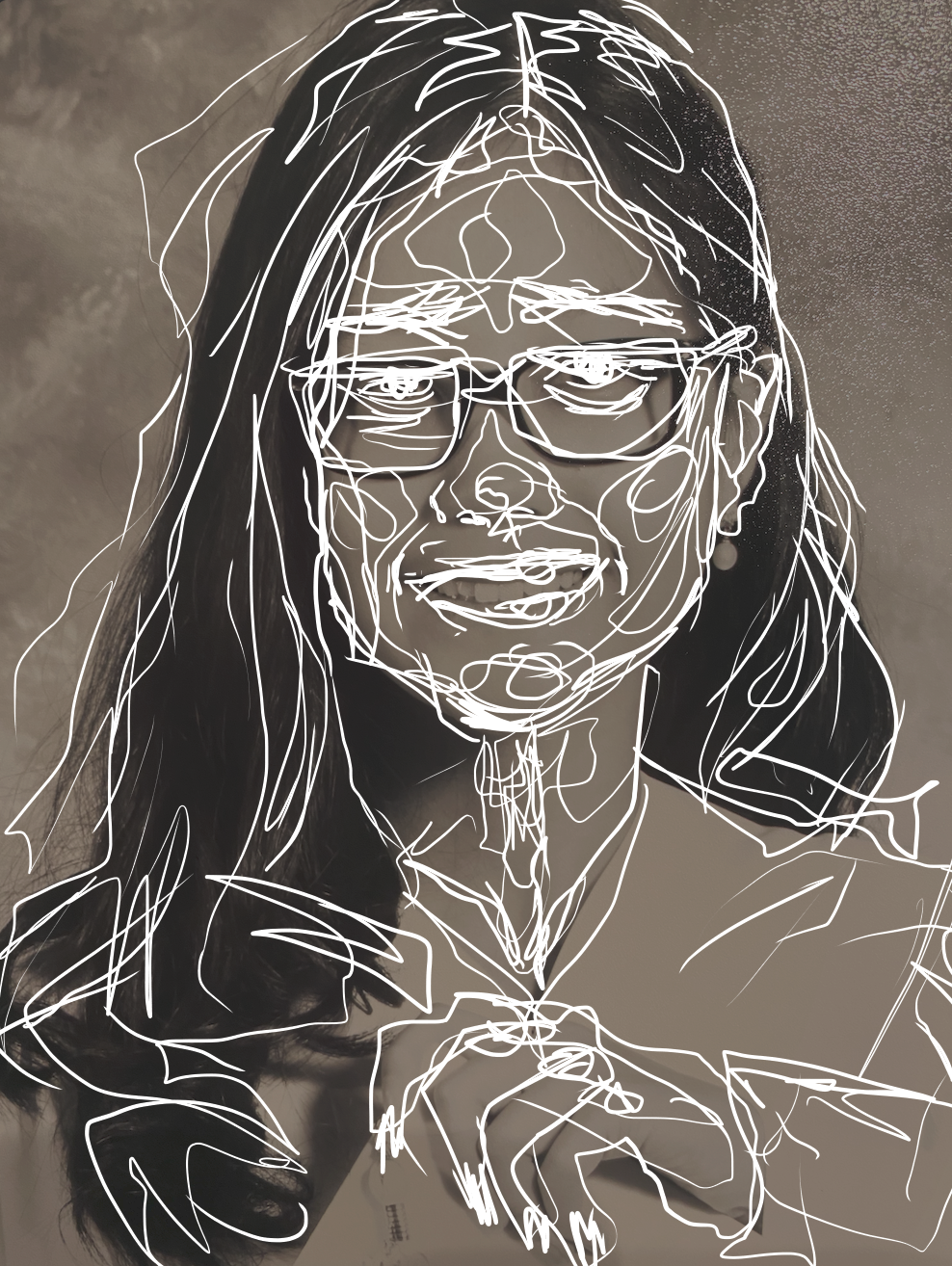 Next, junior Pia’s piece titled “Picture Day” was also displayed. It was composed using an assortment of charcoal on paper, and it was actually created for her first project in IB art, where students were tasked with creating a self-portrait. With the assignment, she wanted her work to represent the internal conflicts that she had dealt with in the past. She notes that, “The original design was to have the realistic black and white charcoal as a replica of my eighth grade yearbook photo, a moment in which I had faked a smile, ignoring my personal turmoil so the photographer could capture the moment of “happiness”. Mr. Respecki volunteered her work unbeknownst to her, for which she is “grateful to him that he did as I am content with my portrait so far.” The opportunity to show her work in the art show with many other fantastic artworks is one that she will never forget. 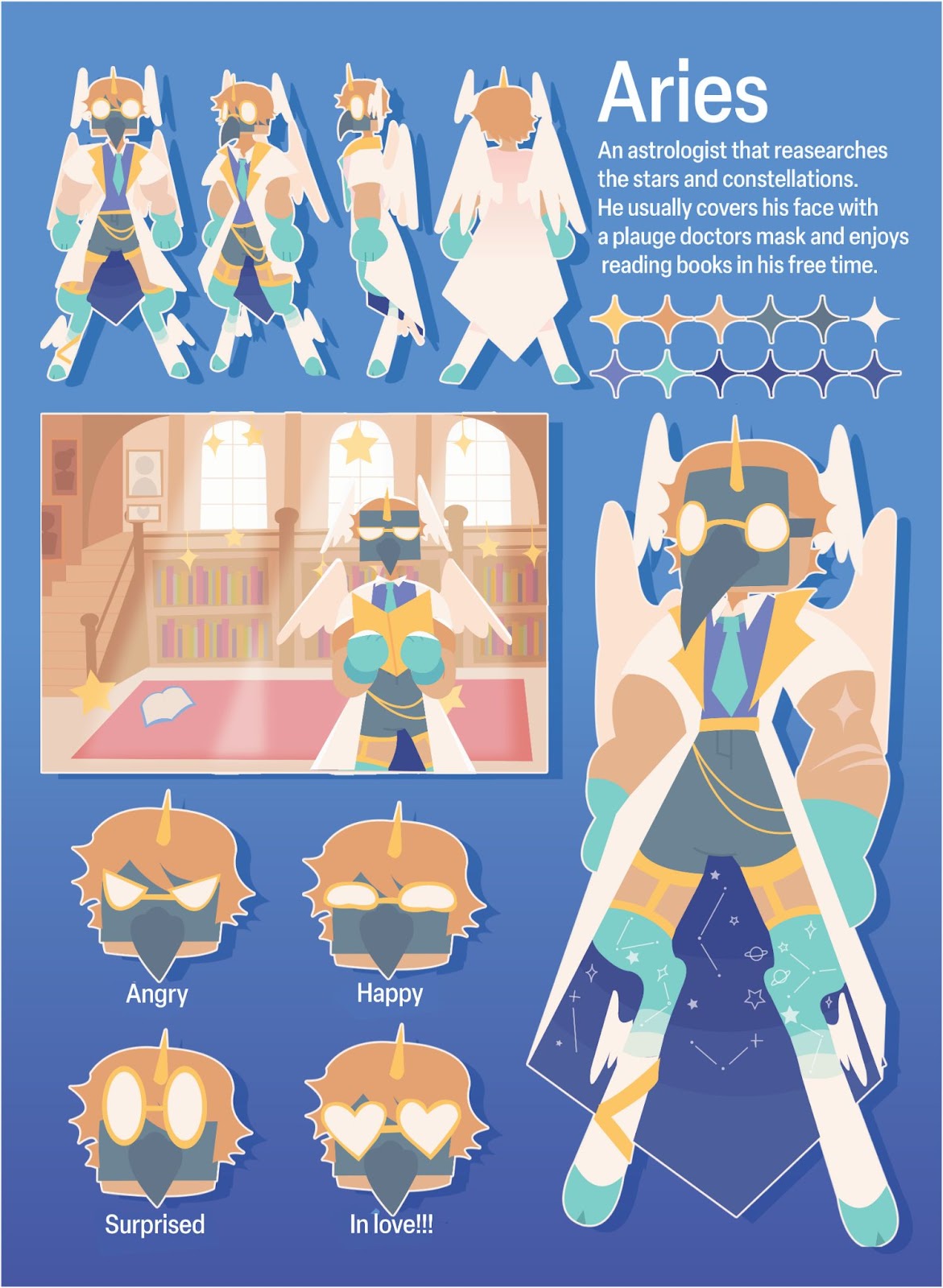 Sophomore Yuka was also able to share her piece titled “Aries”. Taking inspiration from different university observatories like Oxford, she designed the character to be “a university professor because my other ideas of an interstellar spaceship didn’t fit with the elegant idea I wanted to have,” she explains. Her motivation stems from creativity and seeing other people sharing the same passion for art. Being able to join IASAS Art and seeing delegates from other schools “makes me feel more connected with them and I feel like I’ve made some real friends with others from other parts of Asia,” she adds. 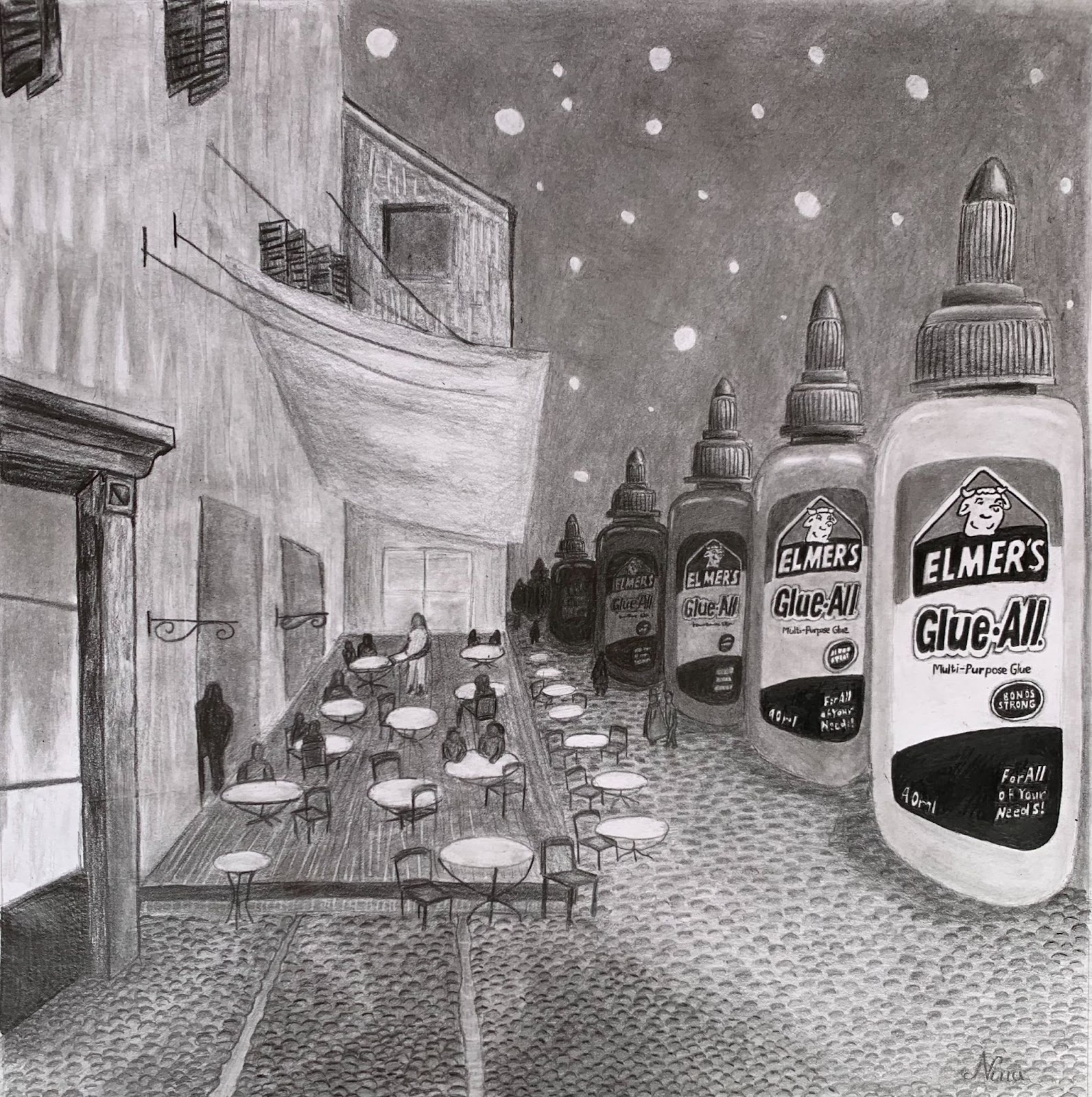 Finally, Nina, a freshman, shares her artwork called, “Elmer’s Cafe Terrace at Night.” She wanted to show how a common everyday item like glue can be a part of a special and meaningful painting in which the glue symbolzes coming together. Inspired by Van Gogh’s painting “Cafe Terrace at Night”, she thought “that it would fit well as the cafe is where people come together to meet and socialize with one another.” As she is a new student at ISM, the opportunity to be introduced to new experiences was something she thought to be a good idea. She continues by saying, “I also wanted to showcase my art because I am proud of how it turned out and thought this would be a nice way to share it.”

The return of IASAS Art is an event that students will continue to remember as it allows an opportunity to exhibit their creativity and artistic skills. The best artworks displayed in the show are representations of each IASAS school to be able to share their talents. IASAS gives students the chance to meet new people from different cultures and artistic backgrounds and immerse themselves in a whole new experience.